The Test Explorer view enables the visual execution and debugging of PHPUnit tests. The tests are executed by the PHPUnit and the results are displayed in the Test View, as shown in the next figure. The PHPUnit output is shown in the PHP (PHPUnit) output tab. 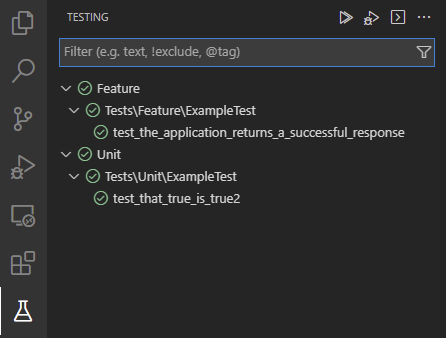 It is necessary to configure the system before the tests can be executed. The process requires PHP, the PHPUnit phar file and a configuration file.

Internally, PHP Tools resolves the tests by executing php -d display_errors=on PHPUnit.phar --teamcity in the workspace root directory. This command relies on the phpunit.xml to be present in the root. The configuration file must identify all the desired tests and provide all the settings to PHPUnit.

Tests require working PHP runtime, which is either:

The tests rely on the phpunit.xml configuration file (PHPUnit configuration), which must be placed in the root of the workspace.

The name, location, extension and settings of the tests are defined in the phpunit.xml configuration file. The tests should be located in a sub-directory, not directly in the workspace root, because PHPUnit does not recognize them there.

Test Explorer View provides tools for manual and automatic test execution with visual representation of the results. The view is only visible if there are some tests or the phpunit.xml configuration file in the workspace.

Test results are displayed in the test explorer view as small icons next to each test with the following meaning:

The actual result of the PHPUnit execution is displayed in the PHP (PHPUnit) output tab, while each test has its own output available by clicking on the test in the Test Explorer View.

in the Test Explorer View. Tests can be debugged one at a time, it is not possible to debug all tests at once. The debugging process is the same as standard debugging.

Tests can be executed continuously by enabling autorun in the Test Explorer View. Once enabled, tests will be executed every time a tested file is saved after modification.