Laravel is one of the most common PHP frameworks allowing developers to quickly built a small or a large scale web application. Its main benefit is the vast array of prebuilt features and extensive set of functions that are ready to be used.

To start a project from scratch, use the New Project Wizard. 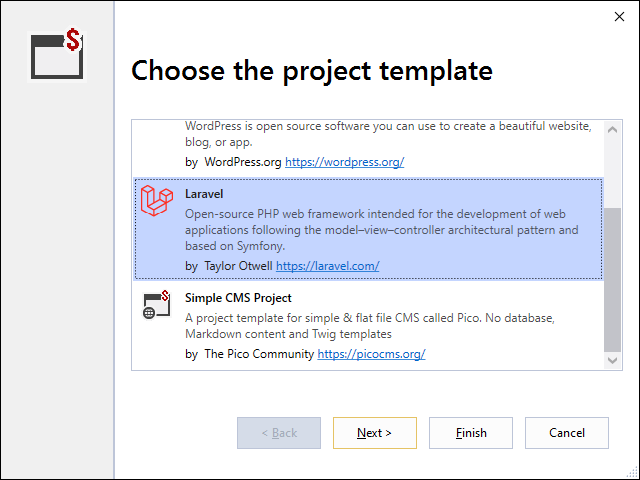 In case you already have a Laravel project, follow the Project from Existing Code instructions.

You can calso directly open the folder with your project (File / Open / Folder), but this won't create a regular Visual Studio project so you won't have all the project features.

Laravel code takes advantage of so-called facades. A facade class provides methods of its service container. The mechanism of services and facade accessors is handled by PHP Tools and works out of the box.

PHP Tools is scanning the project for registered services and resolves the facade accessors classes correspondingly.

PHP Tools recognizes use of class names prefixed with Facades\ name; such classes are treated as a real-time facades (if the corresponding class exists), and provides IntelliSense and code validation.

The editor recognies Eloquent's Local Scopes, i.e. functions prefixed with scope in the Eloquent Model. Those functions show up in the IntelliSense as they should be used. 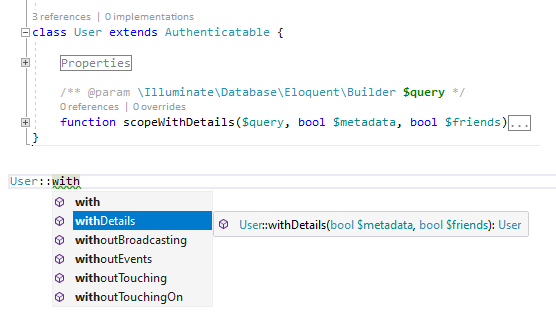 The editor scans for the local scopes (the functions prefixed with scope on a class that implements Illuminate\Database\Eloquent\Model or on a trait that is used within a Model class); such functions are displayed in the IntelliSense and also recognized by the code analysis.

The entire project is continuously analysed for errors with respect to Laravel documentary comments notation, and the use of latest PHP features.

By default, the project vendor/ folder is excluded from the code analysis. This can be enabled in Tools / Options, under the PHP Tools section.

Ensure, the project web root is set correctly. Go to Project / Properties, the Application tab, and make sure the Web Root is set to public.

Run the project with Debug / Start Debugging (F5) command. PHP Tools will start the development web server and initiate the debugging on a localhost address.

In order to attach to a remote server, or a local web server, go to Project / Properties, the Server tab, and choose Custom.

There is a commonly used composer package barryvdh/laravel-ide-helper providing additional features for IDEs. Although it is not necessary since PHP Tools already deal with facades and services, the package contains some additional artisan commands and features. See the project repository for more information on how to use it at https://github.com/barryvdh/laravel-ide-helper.

When creating a new Laravel project using New Project Wizard, the barryvdh/laravel-ide-helper is already preinstalled. Also, when opening a laravel project, the ide-helper gets regenerated automatically.