PHP Tools natively support the Twig template engine since version 1.25 in Visual studio 2015 and newer. PHP Tools seamlessly integrate Twig support into the Visual Studio using the same shortcuts, commands and menus as the other languages. The Twig support is built into the system and its features do not require the Twig engine to be installed in the project, but some features provide additional information when it is present (detailed information is provided for each feature). Twig can be installed either via a composer package (directly available in the PHP Tools) or its source code can be directly included into the project. 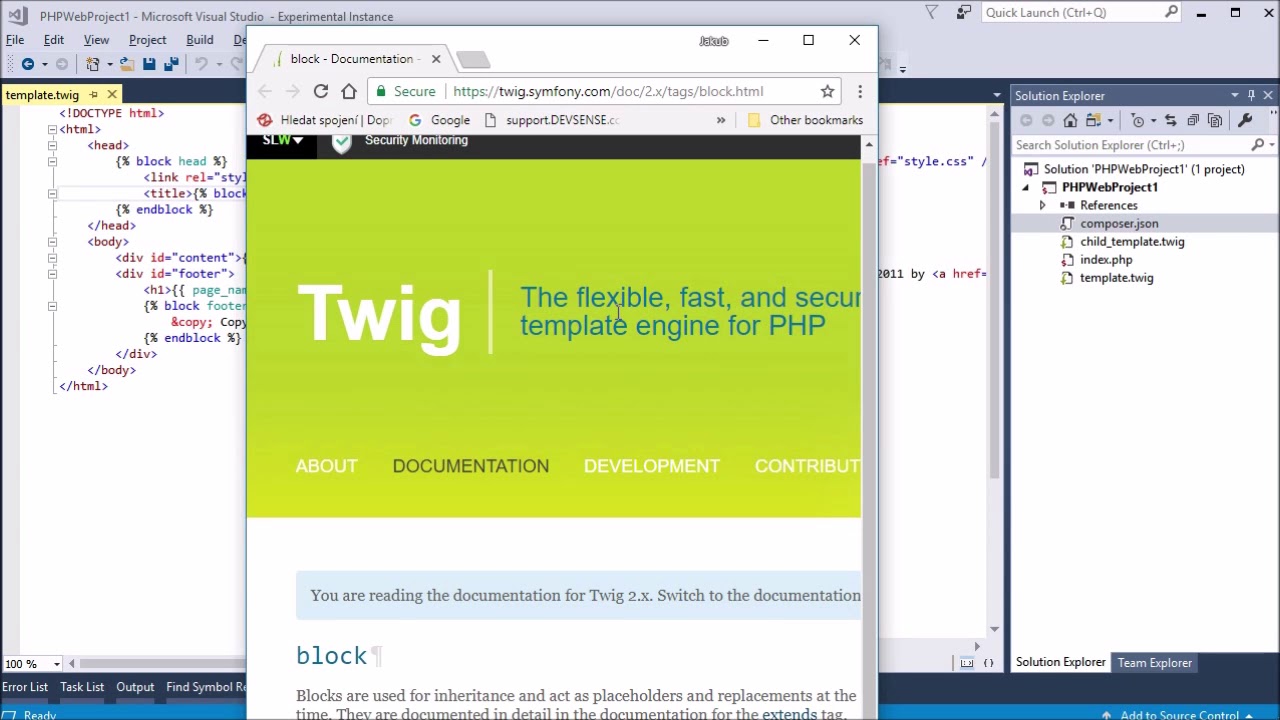 PHP Tools provides complete syntax validation for Twig templates. The syntax analysis reports all the syntax errors, as well as some of the errors reported by Twig runtime during rendering. This feature helps to create valid Twig templates and avoids common errors.

Syntax error in a Twig template (filter used without separator |).

Tooltip for the built-in filter upper.

PHP Tools provides completion assistance containing all the known filters, variables and keywords. The completion list is displayed either when user starts typing a new word or when the completion is directly triggered by the Complete Word command Ctrl+Space. The completion supports the following features:

Completion list for the word upp with the built-in filter upper selected as best match.

PHP Tools supports the Go To Definition command (F12) for all the variables and filters, either intrinsic or user defined. The command opens the file containing the definition of the currently selected variable or filter and places the caret its beginning. Twig navigation is integrated with PHP, custom filters and variables in PHP. The navigation supports the following features:

PHP Tools supports the Help command (F1) for all the keywords. The command opens the web documentation for the selected construct. The help supports the following features:

PHP Tools highlights all the occurrences of the selected variable of filter in the actual template. PHP Tools use the same color scheme as Visual Studio, which is compatible with the VS themes. The reference highlighting supports the following features:

PHP Tools highlighting all the occurrences of the worlds variable.

Twig outlining used to collapse the test macro, a tooltip shows the body of the macro.

PHP Tools offers a split view mode for Twig, where the left panel displays Twig code and the right panel contains the actual PHP code that will be generated from the template by Twig framework. The left panel (Twig) is editable and any changes are interactively propagated to the right panel, while the PHP panel is read-only with syntax highlighting, tooltips and navigation. Both panels highlight the language construct created from the construct under the caret. They are highlighted at the same time and it allows programmers to check what PHP code is generated from the selected Twig code, as well as what Twig code produced the selected PHP code. The panels are synchronized and navigating in one panel automatically scrolls the other one. This feature allows programmers to check the final PHP code during template design and it provides information for optimization. The SplitView provides the following tools:

PHP Tools provides a simplified version of the Insert Snippet (Tab) command for Twig blocks, like if or for. The command is activated by pressing Tab when the caret is placed at the end of certain keywords. When used for a pair keyword, PHP Tools adds the end tag (for example {% endfor %}) and standard parameters supported by the construct, like initial values or limits. PHP Tools supports the following keyword:

Construct completion used on a Twig for loop.

The PHP Tools Twig editor is automatically used for templates with the .twig extension. It has to be manually opened for the templates with other extensions. This is done by right clicking the template file in the Solution Explorer and selecting the Open With... command. The command opens the Open With dialog, where it is necessary to locate the Twig Template Editor, select it and click OK.

PHP Tools Twig editor used to open a template with a custom extension.

Twig can be installed either via a composer package or its source code can be directly included into the project. PHP Tools provides an information bar whenever a Twig template is opened without the Twig template engine installation. It allows users to seamlessly install the Twig composer package, simply by clicking on the Install now link. The bar disappears once Twig is installed. The bar can be closed either once or forever by clicking the appropriate button.

Twig information bar displayed when editing a Twig template without a Twig installation.

PHP Tools provides global options, which modify how the editor works with Twig code. The settings are global for the Visual Studio and can be specified in Tools->Options->Text Editor->Twig. The settings include standard text editor options (intellisense and indentation) available for all editors and Twig specific options in the Advanced tab. PHP Tools provides the following options for Twig: