This first category contains fatal errors, which signal incorrect syntax. These errors must be fixed before the code can be executed. Sometimes, these errors may even prevent the editor from analyzing and highlighting the code correctly as they significantly change the meaning of the following code.

These errors can be the most intricate, because they usually require code refactoring.

The following example shows a simple syntax error including the tooltip displayed by PHP Tools. All the syntax errors are highlighted and reported the same way. 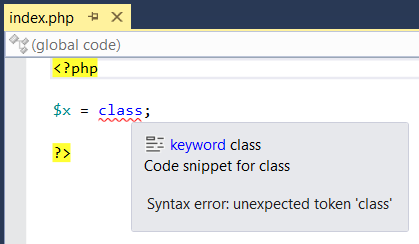