PHP Tools reports compatibility issues caused by using features supported in another version of PHP than the one currently used for the project. These issues are reported as errors, because their usage causes the PHP runtime to crash. PHP Tools reports all the issues located in the code, even when multiple errors are caused by a single construct, like in the example for PHP 7.0.

All these errors can be fixed by switching to a newer version of PHP. If that is not possible, it is necessary to refrain from using the new features or the application will crash.

PHP Tools reports the following issues. Every version of PHP is accompanied by an example showing selected features available in the version as they are reported when using older versions. 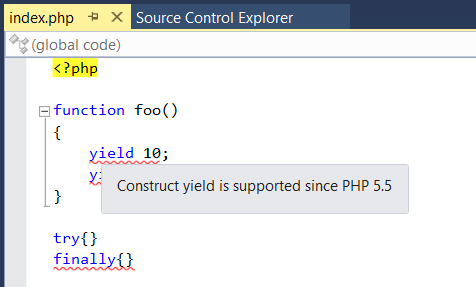 PHP 5.4 is the oldest version of PHP supported by PHP Tools and its features are always available.