The code is analysed semantically in order to find errors that will be thrown in run time. The editor performs type analysis in linear time on a background thread, not blocking the user's UI.

The editor makes use of PHP 5 and PHP 7 type hints and PHPDoc comments. Without specifying the type information, the editor analyses values and expressions in order to estimate the resulting type.

Unknown symbol names such as a class name, function name, constant name or a namespace name are reported as a warning in the user's code. These errors usually indicate a typo or a missing use or an invalid missing namespace name in PHPDoc comment.

PHP Tools recognizes unknown types and provides suggestions that add use declarations or proper fully qualified names for types that are found in the project but are not properly referenced. For more information about suggestions see the documentation page. An unknown type is always reported as a warning in the code. An example of this is in the following image:

Unknown types are recognized in the following situations:

The following errors are syntactically valid but will fail fatally once a containing file is being executed.

The following example shows an incorrect class hierarchy as it is reported by PHP Tools. 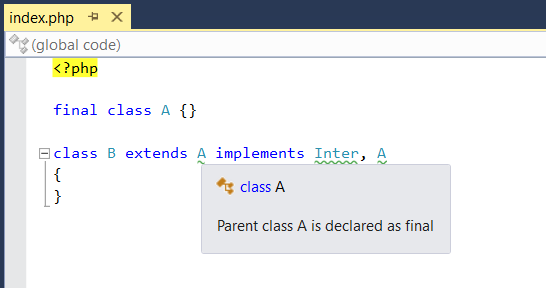